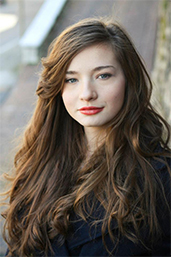 21-year-old Jerica Henline currently resides in Loveland, Ohio. As a young girl she always dreamed of becoming a writer, and also enjoyed NCFCA speech competitions throughout her high school years. Little did she know she would one day have the opportunity to use these talents in Independent Christian filmmaking. In February of 2011, she teamed up with her brother, Joe, in the making of, "The Forgotten Martyr: Lady Jane Grey." Her primary roles on that project were writer and lead actress (playing Lady Jane Grey). The film was awarded Best Young Filmmaker at the 2012 San Antonio Independent Christian Film Festival and went on to receive various other awards in festivals internationally .

Over the years, Jerica has had the privilege to work in a host of various crew positions during several feature films including "Ace Wonder," "Acts of God," and "Beyond the Mask." Her most recent accomplishment was writing the screenplay for the feature film, "Polycarp". Looking back she sees how God put a desire for writing and acting in her heart long before she knew about the Independent Christian film movement. Jerica is currently working as a secretary for Henline Productions and desires to continue pursuing whatever path God leads her.